It’s a place where you’ll find some of the greatest players to ever put on a pair of sneakers, but an event that few collectors and sports fans know about.

On the third Monday in March, The Legends of Basketball brings basketball big names to Naples, Florida to raise money for a good cause. Produced by All Star Events of Naples, this year’s gathering was the third of its kind. It took place in the ballroom of the Hilton Naples hotel and featured Basketball Hall of Famers Kevin McHale, Earl Monroe, Rick Barry and Artis Gilmore.

The event raises funds for Pick up the Ball of Fort Myers, which mentors young men in low-income, high-risk areas to provide them with opportunities designed to raise their level of expectations, increase their chances of success, and improve understanding between all communities. Several young people registered in the program were still present this year and the members of the Hall of Fame made a point of addressing them several times during the evening.

Legends of Basketball can best be described as a combination of “living the good life” and basketball fan nirvana. In addition to meetings, greetings and autographs with the players, program sponsor Porsche Naples has made new models of the sports car available for participants to test drive. My wife took full advantage of it, cruising the streets in a new sports car.

There are cigars, good drinks and enjoyable finger food, but the real draw was the presence of basketball royalty in the form of Hall of Famers McHale, Monroe, Barry and Gilmore.

This year’s reps spent an enjoyable hour signing autographs and talking one-on-one basketball before the main event with VIP guests. Tickets for this part of the event are $250. VIP tickets gave direct access to the four basketball legends and came with a personalized gift bag that included an autographed ball signed by the four Hall of Famers and a special autographed 8 x 11 commemorative sheet.

The legends were in good spirits, talking with the guests as well as each other. It was great to see former teammates and opponents interact with each other, reminiscing about their playing days and talking about today’s players. VIP tickets were sold out in small numbers, which lent itself to providing attendees with extended time with each player.

The main event, which costs $125 to attend, lasted over two hours and featured an elevated main table of all four legends at the front of the room. The evening was hosted by event organizer Michael Byrd of Naples All Star Events. Byrd drove the event forward by asking the players questions about their careers and what inspired and motivated them on their rise to greatness. A special video montage was shown, featuring highlights from each player’s career. This year, organizers also paid a special tribute to the recently deceased Boston Celtics basketball legend and Hall of Famer Sam Jones, who attended last year’s event. Jones’ son paid a touching tribute to his father and told funny stories about him.

Kevin McHale shared advice his father gave him in his youth that inspired him to win a scholarship and succeed as a professional player, Rick Barry mentioned the joy he feels watching his sons play basketball professional. Artis Gilmore talked about his decision to choose the ABA over the NBA (he loved the red, white and blue ball, among other things) and Earl Monroe talked about his time in Baltimore and New York as a member of the ” Cadillac Backcourt” with Walt Frazier.

Members of the public were also able to ask questions of the Hall of Fame panel and there were plenty of raffle prizes and auction items to be won, including a golf bag signed by all four players and a chance to play a round of golf with Rick Barry at an exclusive course in Naples. My wife was lucky enough to win an autographed program framed by Sam Jones from last year’s event in one of the raffles. 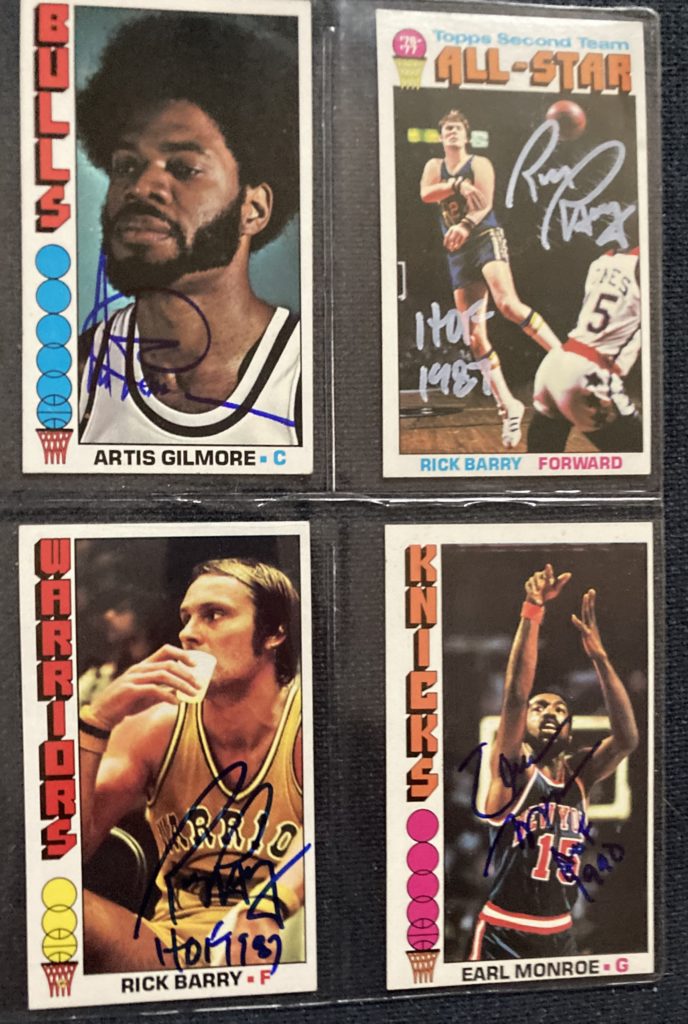 When the Q&A ended, the four Hall of Famers graciously stayed on and signed autographs for anyone who wanted at no extra cost. People brought cards, magazines and basketballs to sign. There was also a program of events which the All Stars gladly signed. 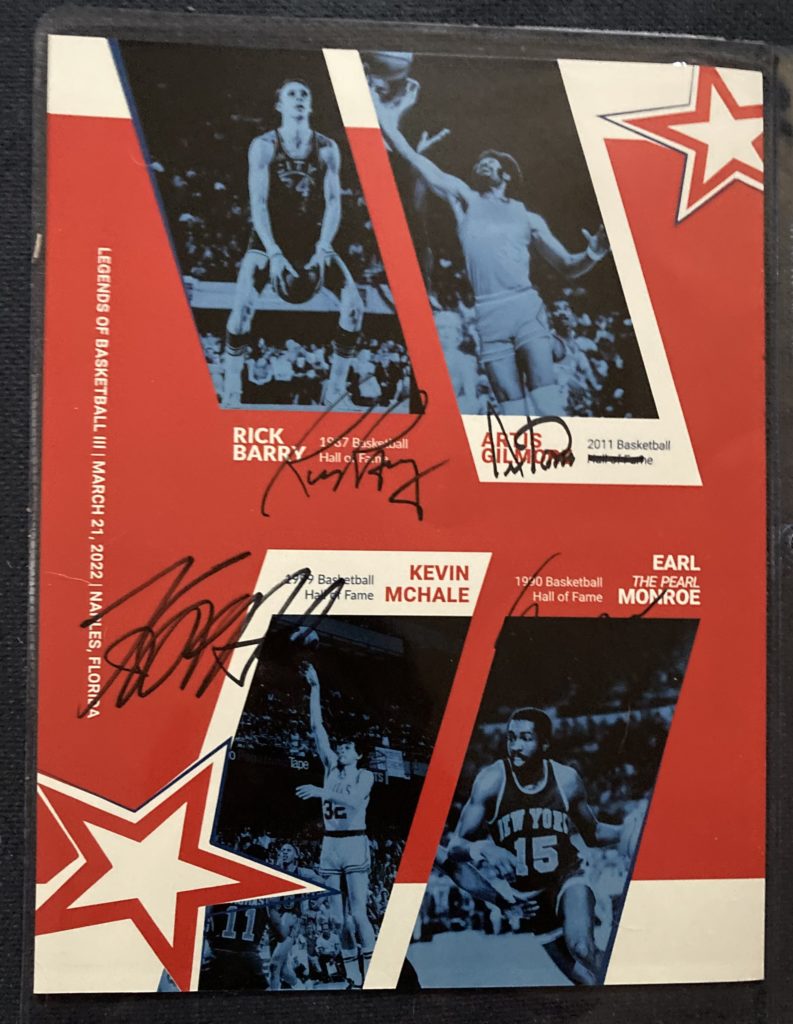 I came home with a bag full of great autographed items from each player and fond memories of meeting each of them, laughing and hearing great stories from the world of professional basketball. 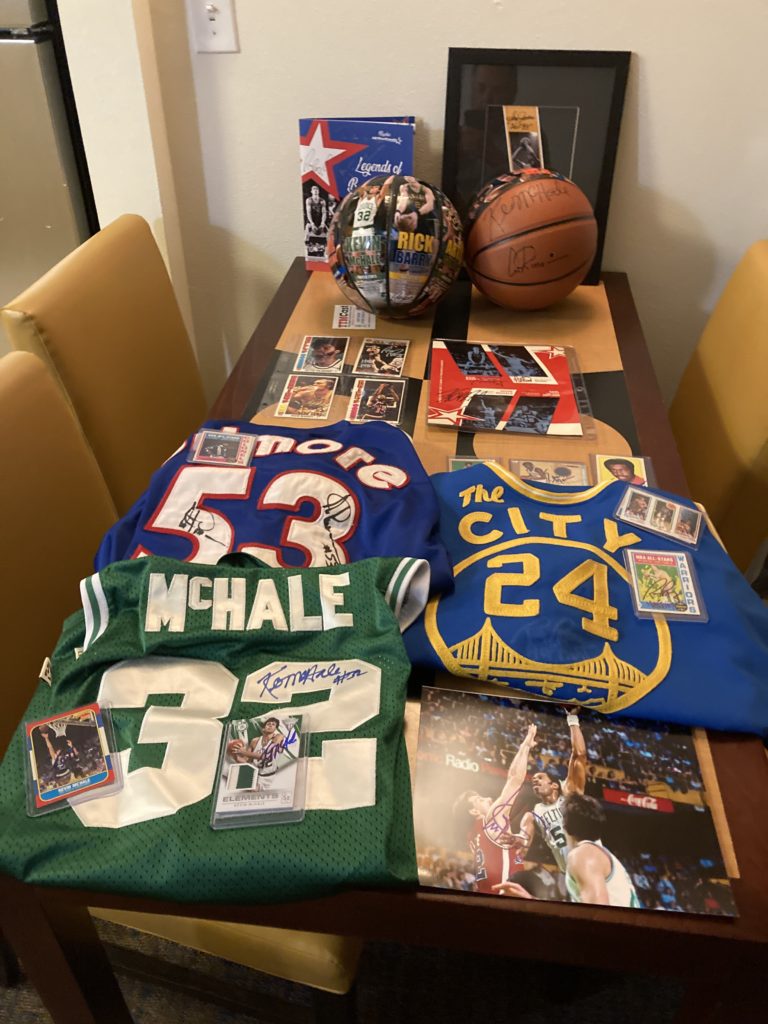 The date for next year’s event has not been scheduled. Check back to the event website for 2023 event information and to purchase tickets. Naples at the end of March is exceptional and The Legends of Basketball event makes it even more fun.

Jeff Baker is a lifelong collector and hosts the weekly Sports Collectors Club radio show that airs Sunday mornings from 7-8 a.m. on the SportsMap radio network. It also hosts the popular TTM podcast.