BEDMINSTER, New Jersey (AFP) – For Brett Eagleson, the Saudi-backed golf event at Trump National this week is an affront: It’s taking place a few miles from where hijackers murdered his father on September 11.

“It’s extremely disrespectful, it’s hurtful, it’s painful,” Eagleson, who was 15 when his father died in the wreckage of the World Trade Center on September 11, 2001, told AFP.

The 36-year-old heads 9/11 Justice, a group that accuses Saudi Arabia of complicity in the atrocities – allegations the Saudi government has denied.

Eagleson was among several dozen relatives of victims and survivors of the al-Qaeda attacks, which killed 3,000 people, who gathered near the course on Friday before the start of the three-day tournament.

Fifteen of the 19 hijackers involved in the coordinated attacks on New York and Washington were Saudi nationals. An FBI memo released last year hinted at official Saudi involvement.

Trump himself claimed in 2016, when he was running for president, that Saudi Arabia was responsible, without providing any evidence.

“[Now] he chooses to host the kingdom on his backyard course where 750 people were swept away,” Eagleson said, referring to the number of New Jerseyans killed on 9/11.

Funded by Saudi Arabia’s Public Investment Fund, LIV has sought to attract top golfers from the established PGA and DP World Tours with contracts that have totaled hundreds of millions of dollars.

Human rights groups say the venture is an exercise in “sportswashing” used to bolster Saudi Arabia’s international reputation. Organizers insist their intention is to boost the popularity of golf around the world.

Avid golfer Trump has become a vocal advocate for LIV, urging players to “take the money” and sign with the Tour. 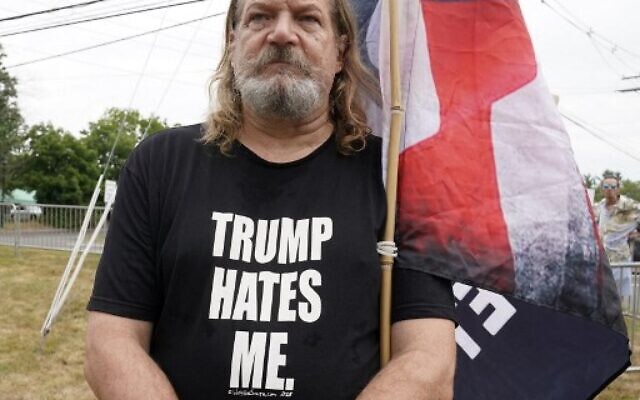 A group of 9/11 family members and survivors of the 9/11 Justice organization hold a press conference in Bedminster, New Jersey on July 29, 2022. (Timothy A. Clary/AFP)

He brushed off criticism of 9/11 families in an interview with The Wall Street Journal last week.

But Eagleson says Trump’s involvement will hurt him politically as he considers whether to run for the White House again in 2024.

“Some of our biggest 9/11 advocates are family members of the FDNY and NYPD. And these have been some of Trump’s biggest supporters. Well, not anymore,” he said.

LIV organizers previously said the 9/11 families “have our deepest sympathy,” but “we believe golf is a force for good in the world.”

“I had trouble sleeping last night, just anger,” the 58-year-old told AFP as relatives held up pictures of their late loved ones and wore T-shirts saying “n ‘never forget’. 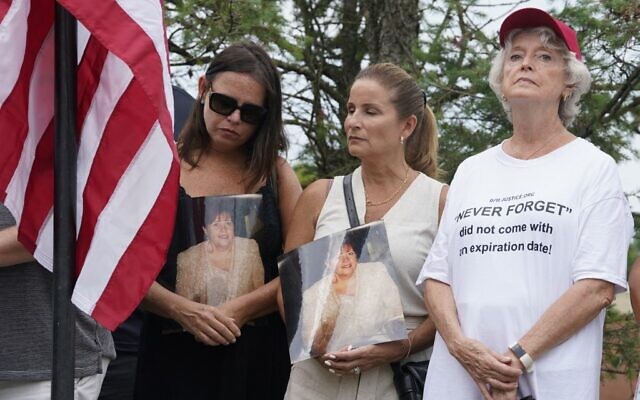 A group of 9/11 family members and survivors of the 9/11 Justice organization hold a press conference in Bedminster, New Jersey on July 29, 2022. (Timothy A. Clary/AFP)

Eagleson’s father, Bruce Eagleson, was at a meeting on the 17th floor of the South Tower when hijackers rammed United Airlines Flight 175 into the skyscraper. He was 53 years old.

Eagleson says his father was a huge golf fan whose favorite player was Phil Mickelson, one of the first players to defect to LIV.

“I don’t know how he lives with himself,” Eagleson said of Mickelson. “He literally chooses to take the money over any sense of morality.”

More events are planned for upcoming LIV events in Boston, Chicago and Miami, with the latter tournament being held at a different Trump course.

“We’re not going to be leaving anytime soon,” Eagleson said.

You are a dedicated reader

We’re really glad you read X Articles from The Times of Israel over the past month.

That’s why we started The Times of Israel ten years ago – to provide discerning readers like you with must-read coverage of Israel and the Jewish world.

So now we have a request. Unlike other media, we don’t have a paywall in place. But since the journalism we do is expensive, we invite readers to whom The Times of Israel has become important to support our work by joining The Times of Israel community.

For just $6 a month, you can help support our quality journalism while benefiting from The Times of Israel WITHOUT ADVERTISINGas well as access Exclusive Content only available to members of the Times of Israel community.

Thanks,
David Horovitz, founding editor of The Times of Israel