COULEE CITY – About 400 people visited Coulee City on April 1 to stroll through downtown businesses and admire the art. This is quite impressive for a town of less than 600 inhabitants.

“I had printed out about 200 of these maps,” said event organizer Don Nutt, owner of Cariboo Trail Studio in Coulee City. “And I gave out all but a few of them. And some of the groups are five or six people with a card. So doing the math, I guess maybe 400. Which is a good crowd for Coulee City.

The art walk was made up of 14 artists and authors, who set up their exhibits inside eight businesses on Main Street. Exhibitors came from central and eastern Washington – Brewster, Okanogan, Soap Lake, Waterville – as well as Coulee City itself.

“It’s a perfect city for that,” said Keith Nielsen, who came from Moses Lake with his wife Melinda and their dog Bella. “I walked through Coulee City but actually walked in and saw the city; I’m excited.”

The center of activity was Cariboo Trails Studio, where Nutt showed his own oil paintings, largely centered on Western themes and desert landscapes. Sharing the space was Soap Lake’s Lyn D. Nielsen, author of a trilogy of novels as well as a children’s book called “Hey, There’s a Dog on My Feet!”

Nielsen lived in Coulee City years ago, she said, so the show felt like a homecoming for her.

“I was living in Coulee City when I wrote the first book in the trilogy, ‘Places of Sage’. And then we had to move because my husband was working on the west side as a bricklayer in Seattle. So after nine years of traveling back and forth, I returned to the western part. I finished the second book there. And then we came back here in 2017. So we kind of came full circle. And really happy to be back. Being back in Coulee City on Friday for this art walk meant a lot to me, because that’s where I was living when it all started.

Down the street from the studio, in the Spokane Teachers Credit Union building, local historian Mick Qualls of Ephrata had a display of books and memorabilia related to the area’s Wild West heritage.

“Coulee City is famous for its gambling halls and wild women,” Qualls said, noting that five US presidents have passed through the city.

Another local history guru, Dan Bolyard of Coulee City, had set up a table in the Coulee City Public Library where he was offering copies of his latest book, A History of Ephrata. Bolyard is also the author of a book devoted to his particular passion, entitled “Big Bend Railroads”.

The library itself also took center stage, with shelves of mini-canvases painted by patrons of the local library.

Inside the Ideal Endeavors shop, which offers an amazing range of woodcarvings, Waterville artist Amy Larsen had staked out a corner and filled it with her paints.

“I’ve been incredibly busy,” she said. “Everyone is happy to be outside.”

Among Larsen’s offers were parts of a year-long project she had set for herself, individual sheets in a variety of media.

“It was a project several years ago,” she said. “I wanted to make 365 sheets, one for each day of the year. I did them, but the last third was a bit like pulling teeth.

But art takes work, and so does a city-wide art show.

The art walk started as a vague idea in November, Nutt said. He had been doing private shows at his studio for years, drawing art lovers from across the state, but the pandemic had made many people uncomfortable in his small shop. So he took to Facebook and mentioned his idea to a few friends, and it sold out quickly, he said.

Next, Nutt went door-to-door at local businesses, asking which ones would be willing to host artists. Downtown Coulee City is quite compact, he pointed out, so it wasn’t a very long walk. And he found that merchants were keen on the idea.

“They just went absolutely crazy about this stuff,” he said. “They really did everything, helping us out and baking cookies for customers and all that kind of stuff. So that was a really good thing…kind of unifying the community again, after the pandemic kind of forced everybody to go home, for everybody to come out.

There will definitely be more art walks, Nutt added, though whether it’s annual or biannual is yet to be determined.

His efforts have not been lost on artists, many of whom have expressed their appreciation for his work. Ralph Reed, whose wife Barbara Conner Reed was showing paintings, summed it up in a short statement.

Joel Martin can be reached by email at [email protected] 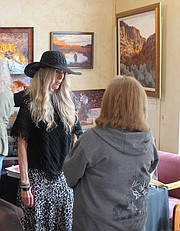